In 1989, a bit of serendipity introduced a funny little waxed yarn item, then called Sticky Wikki, to Kem Clark, a marketing consultant in Phoenix. Clark was immediately intrigued by the product, invented by a company in Chicago, and spent a considerable amount of time discussing its potential with the inventor. When it became obvious he was more inventor than marketer, Clark stepped up to buy the patent, and a new category of product was born…waxed yarn.

To Clark, part of the (value) (intrigue)…of the product was its versatility…she could see it in the classroom as a teaching tool, and in restaurants as a clean alternative to crayons…and as a fun creative activity toy as well as an Arts & Crafts medium. Renamed Wikki Stix, it was launched in January of 1990.

As the developing interest in Special Needs has evolved, Wikki Stix have become a featured player in this market, as a soft, pliable and tactile manipulative used as a calming fidget toy as well as for fine motor skills, and as a raised line medium for the blind and low-level sighted. It is a favorite of Occupational Therapists for myriad applications in that field.

Wikki Stix themselves are wax-infused yarn, available in three lengths: the original six-inch strand, which was the only thing available from the inventor, and then a slightly longer eight-inch strand, and ultimately three-foot lengths…all sizes available in over 20 colors.

From the original packages of primary and neon colors, Wikki Stix have grown into a product line of 38 products for kids, plus two “adult” versions…a stress reducer and Fixables…Wikki Stix as a handy household helper. “All of us here in the office use them for all kinds of things around the house and for a quick fix when anything breaks,” said Clark. 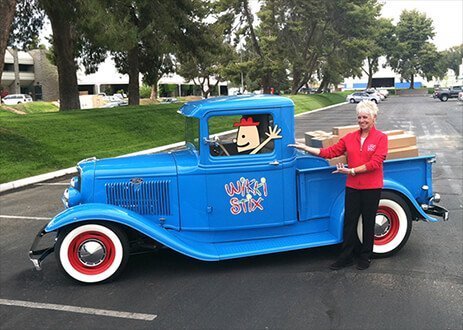 We are a small, friendly and playful company with the wonderful task of producing a unique and amazing product to delight, inspire and entertain children, while bringing peace, quiet and joy to parents and grandparents!