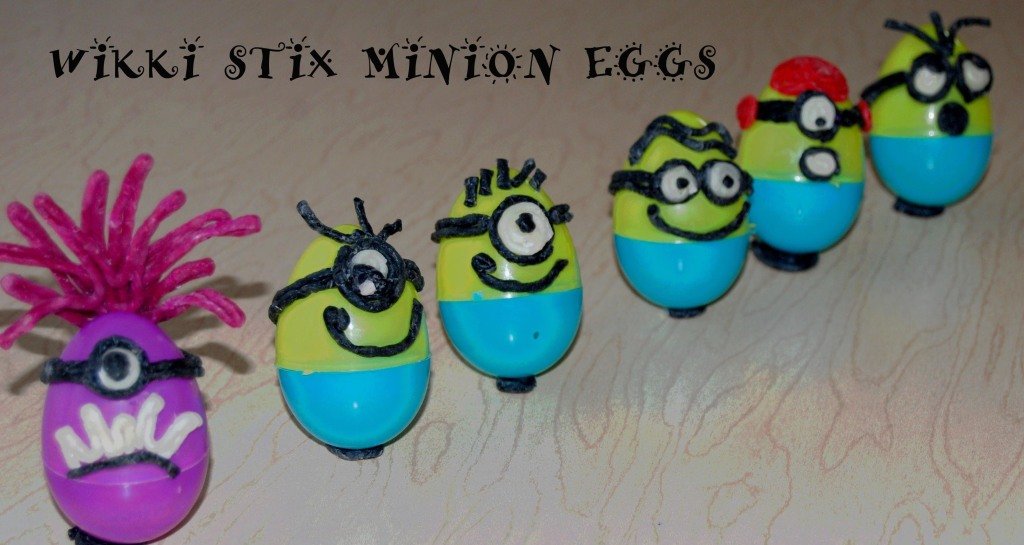 Do your kids love Minions?  Our kids have been in an extended “Minion-love” phase since the movie, Despicable Me 2, came out last summer.  We hope your own children will enjoy creating and playing with the Wikki Stix Minion Eggs! 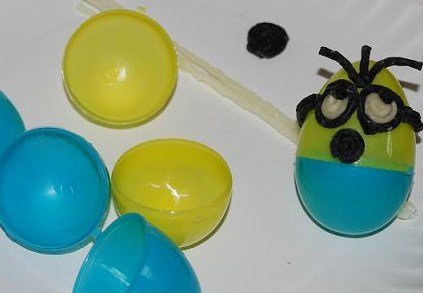 For each Minion, have the children take apart the blue bottom and create the Minion features on the yellow egg top.  After the features are created, the eggs can be put back together.

Two-eyed Minions:  make two eyes (as given above) and place both shapes close together.  The temple pieces of the Minion glasses can be constructed with two black Wikki Stix, folded in half, and attached to each side of the eyes.

Various Minion Features:  Print several Minion pictures for the children to look at (or print the photo from the top of this page).  The children can copy the features shown in the photo to their Easter Eggs or create their own features as desired.

The EVIL Minions are a fun variation to create.  The hair of the EVIL Minion is easily crafted with purple Super Wikki Stix.  Each longer Wikki Stix strand will make one EVIL Minion’s purple hair.    To form the hair, begin at one end and accordion fold the strand (making some folds a little longer than the others).  When finished, press all the folds together at the bottom and adhere to the top of a purple Easter egg.

To make the MINION EGGS STAND UP on any surface:  Have the children create a black spiral from one strand of Wikki Stix and place it on the bottom of the Minion Eggs.  The Wikki Stix will adhere to a tabletop, a paper plate, or most any surface for displaying the Minion eggs.

Learning Games to play with the Minion Created Eggs:

2.  Letter Matching – Label the top half of the Minion egg (backside of the egg) with one uppercase letter from the Alphabet; label the bottom of the egg with a lowercase letter. Hide the egg halves around the house or the classroom. The game is over when all matches have been found.

Extension idea for older children:   Write a word on the top half and paste a picture of the word on the bottom half. Have the children try to match the word with the picture.  Alternate ideas:  This game can also be done with numbers, basic addition problems, or sight words.

The Wikki Stix Created Minion Eggs are a fun craft for kids (or adults) to make!  The kids will adore playing and learning with the Minion Eggs (they also make a great gift for Minion fans of all ages)!