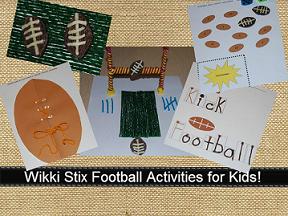 There are few sports as synonymous with fall as football! Kids love the excitement of watching, practicing skills, and playing football whether on a local team or in a friendly game in their own backyard! The Wikki Stix football craft and literacy activities below are designed to capture the excitement of football and translate that into games that will encourage learning through play. 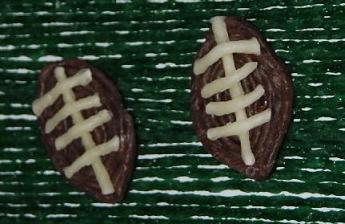 Keep the football crafts for use in some of the activities offered below. 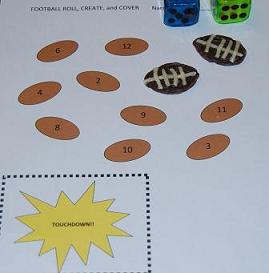 Materials needed: the football crafts created above to use as counters for the game (younger children can made a simple oval shape from one Wikki Stix to use as football counters if desired), one game file (linked above), two dice per game, and scissors to cut out the TOUCHDOWN reward.

Print the game file for each child and laminate for durability (clear contact paper will work if laminating supplies are not available). Have the children roll two dice, count the total number of dots on the dice, and place a Wikki Stix created football/oval over the corresponding number. Play should continue until all of the numbers are covered (if a number is already used, the children should roll the dice until a number can be covered). When the game is finished, the children can cut the TOUCHDOWN reward square to display (Note: hole punch the TOUCHDOWN square and thread a Wikki Stix through the hole to form a simple bracelet/band the kids can wear for the day). 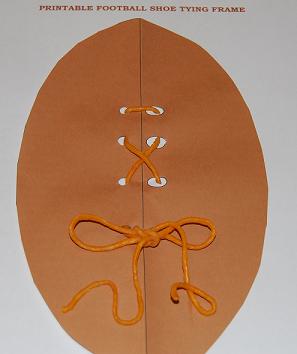 Materials needed: One Football Lacing file (linked above), a hole punch, and one strand of Super Wikki Stix.

Print the Football Lacing file and cover with clear contact paper. Fold the football in half and punch through the holes. Thread one strand of Super Wikki Stix through the holes (see photo above).

Even in the age a Velcro, learning to tie a shoe is an important (and challenging) task for kids! By using Wikki Stix to teach tying skills, the “loops” will hold their shape better than regular laces! 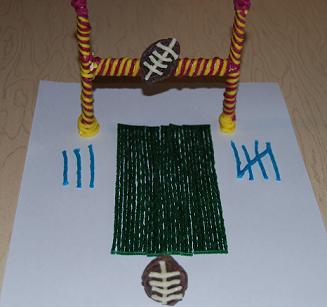 Have the children practice “kicking” the goal by holding the tip of one of the WIkki Stix created footballs with the non-dominate index finger and “flicking” it with the dominant index finger. It is quite a fine motor skill to develop! Once the kids are successful in “kicking” a touchdown, they will want to play over and over. Adults can enjoy the game, too! 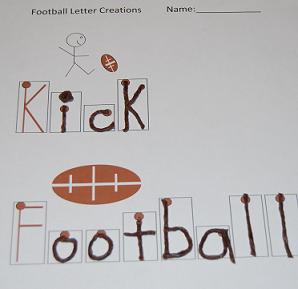 Extension: Read Touchdown! My Football Book by David Diehl. In the book, young kids are introduced to one football-related word per page. Children love to repeat (read) the words (kick, pass, snap, etc.) and can act out the words as they are introduced in the book.

Football is an exciting game for both kids and adults! Help capture the excitement this fall with fun Wikki Stix games for learning and play!