Wikki Stix Christmas Ornament Crafts for Kids to Make and Give!

Previous Next
Wikki Stix Christmas Ornament Crafts for Kids to Make and Give! 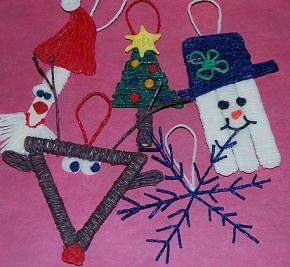 The Wikki Stix ornament crafts below are perfect creations for holiday parties! The crafts can be enjoyed by children of all ages and make great child-created gifts for Christmas! 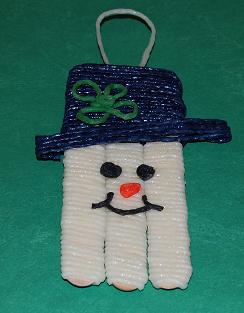 The children can make a hat, 2 eyes, a nose, a mouth, or other desired features for the snowman with Wikki Stix (see photo above). 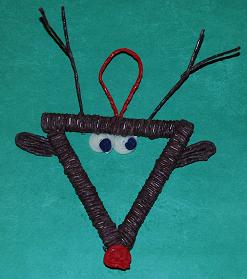 Set out the craft sticks and Wikki Stix on a tray or table. Have the children use the brown Wikki Stix to completely wrap the 3 crafts sticks. When wrapped, the crafts sticks should be make into a triangle (the Wikki Stix will adhere the ends together and no glue is necessary).

If desired, the children can make brown antlers and ears for their reindeer craft as pictured above. The hanger for the reindeer craft is made from one Wikki Stix (folded in half and opened at the top to form a loop as in the photo above). 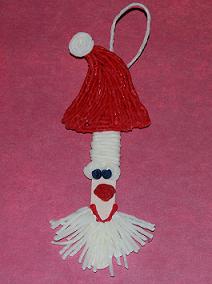 Santa’s eyes are made from two Wikki Stix spirals with smaller cut blue pieces for the center. To make the nose, invite the children to wrap red Wikki Stix into a ball to resemble Santa’s “cherry” nose.

To make the mouth and beard: Have the children cut a small piece of red Wikki Stix to form Santa’s mouth on the craft stick. The beard is made of various cut lengths of the white Wikki Stix.
All of the Wikki Stix pieces will adhere to the craft stick when pressed firmly in place. An ornament hanger can be made from one Wikki Stix (folded in half and opened at the top to form a loop). 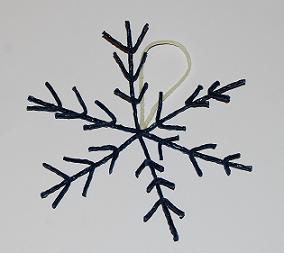 Make a tray of blue and/or white Wikki Stix and invite the children to play. The snowflakes in the photo above were made by making an X with two strands of Wikki Stix. A third Wikki Stix strand can then be place horizontally across the center of the X to form 6 ends.

Wikki Stix pieces can then be cut and formed into the V shapes. The V shapes are then added (3 per side) to each of the 6 snowflake ends (see photo above). The hanger for the snowflake ornament is made from one Wikki Stix folded in half and then opened to form the loop.

Wikki Stix can be cut with safety scissors, but younger children will need assistance.

The Wikki Stix snowflakes crafts are simple yet quite impressive looking crafts for kids. Children can also design the snowflakes on wrapping/tissue paper as decorations for Christmas packages. 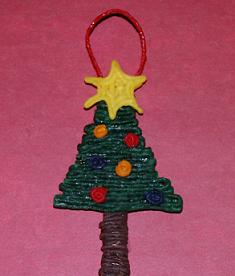 Set out the Wikki Stix on a tray or a table and invite the children to create a Christmas tree.

To make the tree trunk: wrap one craft stick with brown Wikki Stix and set aside.

Invite the children to decorate their Christmas trees in any manner desired. Some suggestions: garland, ornaments, a star, “tinsel” from cut pieces, or small lights.

The Wikki Stix Christmas Ornaments are creative fun for special holiday parties. Invite the children to play and craft by creating a special place with supplies where kids can design and create.