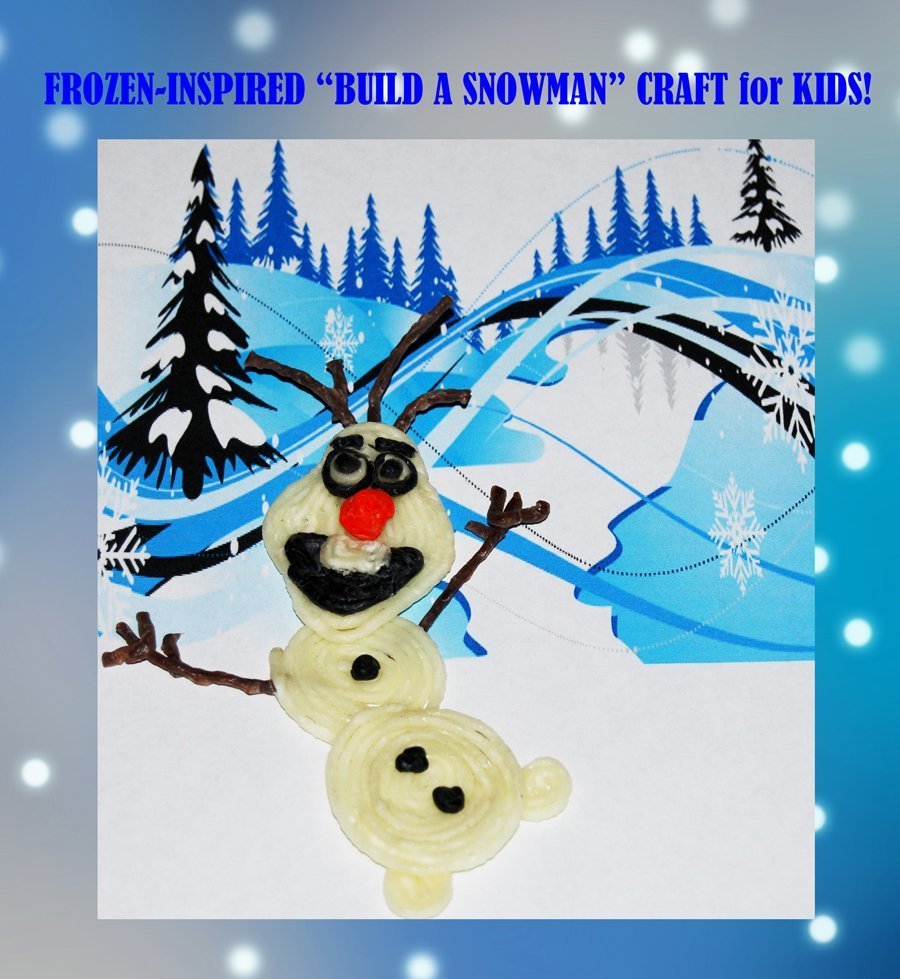 If you have kids at home, you are probably familiar with the Disney movie, FROZEN. The film is a wonderful variation of the SNOW QUEEN by Hans Christian Andersen that includes a funny little snowman character named Olaf. This Christmas, invite your children to create Frozen-inspired Wikki Stix snowman crafts or treat bags that will encourage creativity and fine motor skills! The “Build a Snowman” crafts and bags make a great party activity, a classroom gift, or a gift from kids to family and friends.

To create the Snowman’s Features/Hair/Arms: Olaf’s mouth is created from one black Wikki Stix formed into a triangle (round the corners slightly) and a white Wikki Stix rectangle tooth. Olaf’s eyes are made from small white Wikki Stix balls (outlined with black Wikki Stix) and small black ball centers. Pieces of black Wikki Stix are also used for the eyebrows. Kids can make Olaf’s nose from half of an orange Wikki Stix formed into a ball. Olaf’s “stick” hair is designed from cut pieces of brown Wikki Stix. Cut four or five smaller pieces of Wikki Stix and press to the backside of the snowman’s head (so that some of the brown pieces are showing to resemble sticks). Brown Wikki Stix is also used to create the stick arms and fingers for Olaf. Just press the pieces together and join the brown stick arm underneath the snowman’s body.

In the movie, Olaf’s body comes apart in many silly ways. The funny snowman has captivated kids and is a beloved character. According to Chris Buck (Co-Director of Frozen), “The fun part of Olaf, we learned early on that his body parts can fall apart and we knew that we would want to take full advantage of that. You will see quite a bit more of that in the movie in a surprising way.”

With Wikki Stix, the snowman craft can be taken apart and re-constructed over and over. Wikki Stix is made from durable materials that will withstand many hours of creative use! The snowman building challenge can be adapted for kids of various ages. In the photo above, the snowman creation is designed for 3-5 year old kids. The snowman can be separated into additional pieces by removing the eyes, mouth, eyebrow parts, and nose to make the snowman construction more challenging.

The Olaf “Build a Snowman” treat bags will provide hours of construction and pretend play for kids this Christmas! They make a great party gift, or a winter non-candy treat!